Half is not enough!

Five months ago, on March 22nd, in the poetical city of love, world famous Verona, I presented at the XI ICF (International Coach Federation) Italia National  Conference my speech on “Eastern Wisdom and the Spirit of Coaching”.

Before my turn, due after the mid-morning coffe break, another very good speaker introduced us to the world of Mindfulnes, guiding us through a short meditation session. That served me well in order to calm my agitation for having to present to around 150 Italian coaches what I had never exposed to anybody, deeming it very personal: my spiritual quest, a journey started when I was a teenager to discover what is beyond the visible and which developed into a personal search for something inside me, difficult  to tell and share with those who are not on a similar path.

As it often happens in these cases, the time allotted for my presentation flew away. When I first checked my watch, 30 minutes out of the 45 at my disposal had already gone and the audience in front of me, my colleague coaches, seemed still interested in what I was saying. This injected enough confidence in me to let me finish my presentation in time, skipping only a few minor topics, and convey the fundamental concept (actually two, as I discovered later) I wanted to shed some light on.

My manifest objective, as I declared at the beginning of my speech, was to show how some essential principles of Coaching are the same embodied in two important Eastern spiritual traditions such as Dzogchen, present in many different schools of Tibetan Buddhism, and Taoism, of Chinese origin. 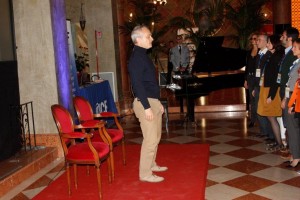 What wasn’t clear to me then, but has become so during the unfolding of my speech and in the following hours, when many colleagues have shared their own similar personal experiences with me, was that I was exposing and giving the same dignity to that part of myself which I had always kept hidden, private, thinking that it was not “presentable” in working, “serious” environments. I was literally doing a “spiritual” outing, putting back together my two souls and sharing them in a re-united form: my “outer” attire, dressed in a suit, and the “inner” one in loose outfit, or even in the black and white traditional Tai Ki Kun garment.

From then on, with a daily unstoppable “crescendo”, worlds which had seemed far and irreconcilable have shown their thousands connections, colored and compact texture which weaves together all that we do into our oneness of human beings.

I felt and I feel enriched, complete. Finally able to enjoy and use all that I have inside me.

I wonder why I have always lived showing only half of what I am. Half is not enough!