Are we the victims of a cruel fate?

We often think that we cannot win against adversities. Is this really true? 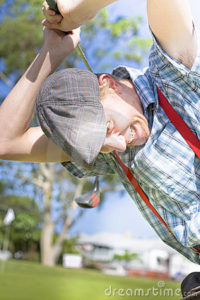 This is what I asked myseld the other day when I went to practice my swing on the driving range. As I had not been practicing for some time, due to work commitments, I was not surprised that my shots had a rather randomic nature. As I kept practicing and the quality of my shots was consistently decreasing, instead of going up, I started cursing the unjust and cruel fate taking shots at me rather letting me take mine… I felt like a puppet in the hands of vicious demons.

I then suddenly reminded myself that I am a sport mental coach, as well as a doomed golf player. I then asked myself: what would I say to a client of mine in this situation?

Well, I would probably tell my client not to insist in what she/he is doing and trying to achieve. I would suggest to do something different. Ok, I told myself. it sounds like a good idea. So I immediately  stopped trying to perform the “Grand Swing” and I relaxed my “try harder” stance. I started doing half swings, using less force and bringing up the enjoyment again. Suddenly everything changed inside and outside myself. I lifted my head, no longer bent by the cruel and fierce destiny black cloud and I regained possession of me, of my ability to act differently, no longer stuck head down into a bottomless hole.

Needless to say, my shots begun to fly freely into the sky, as I was too.